Corruption: A risk in desperate need of navigation

The organisation, funded by charitable donations, is independent and will gather and publicise information about official corruption and hand evidence to authorities. Whistle-blowers are encouraged to submit information anonymously online to the new Corruption Watch site and cell phone message hotline.

The launching of this unit follows on the recent announcement of Transparency International that South Africa is ranked 64th worst of 183 countries and territories in 2011, down from 54 of 178 the previous year.

The magnitude of corruption in South Africa became evident yet again when the Limpopo province was declared technically bankrupt by the end of 2011 as it could not pay service providers or civil servants and unauthorised expenditure had ballooned to R2,7-billion.

“The province has been spending beyond its means. This has to stop,” the joint ministerial team on Limpopo said in a statement that summarised instances of severe financial mismanagement in several provincial departments.

South Africa does not stand alone in this war against corruption. It is estimated that corruption causes the African continent to lose in excess of US$300-billion annually and that illicit money in the form of bribes and kickbacks is still flowing from developing countries into the West at a rate of approximately US$11,26-trillion a year. The far reaching effects that corruption has, specifically on development in Africa, were highlighted by Professor Patrick Lumumba from the Kenyan Anti-Corruption Commission during the 33rd Annual conference and Exhibition of SAPICS – The Association for Operations Management of Southern Africa in June 2011.

During his presentation Professor Lumumba, known by many as Kenya’s anti-corruption guru suggested that the fight against corruption should focus on counteracting poor governance rather than “catching the crooks.” He recommended that multi-disciplinary strategies which target political, economical, legal, administrative and moral aspects should be introduced.

“The fight against corruption must be done without fear, favour or ill-will for the sake of this generation and generations yet to be born,” said the professor, whose eloquent oration won him the Terry Smee Award for the Best Speaker at the conference.

SAPICS is proud to announce that Professor Lumumba has agreed again to be a presenter at its 34th Annual conference and Exhibition which is to be held at Sun City, from 3 to 5 June, 2012. The theme of the conference is “Africa, release the potential”.

The scale of SA’s procurement fraud 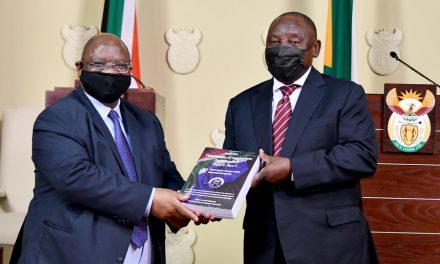 The Urgency of Procurement Reform after State Capture in South Africa

What is the true cost of unethical conduct?