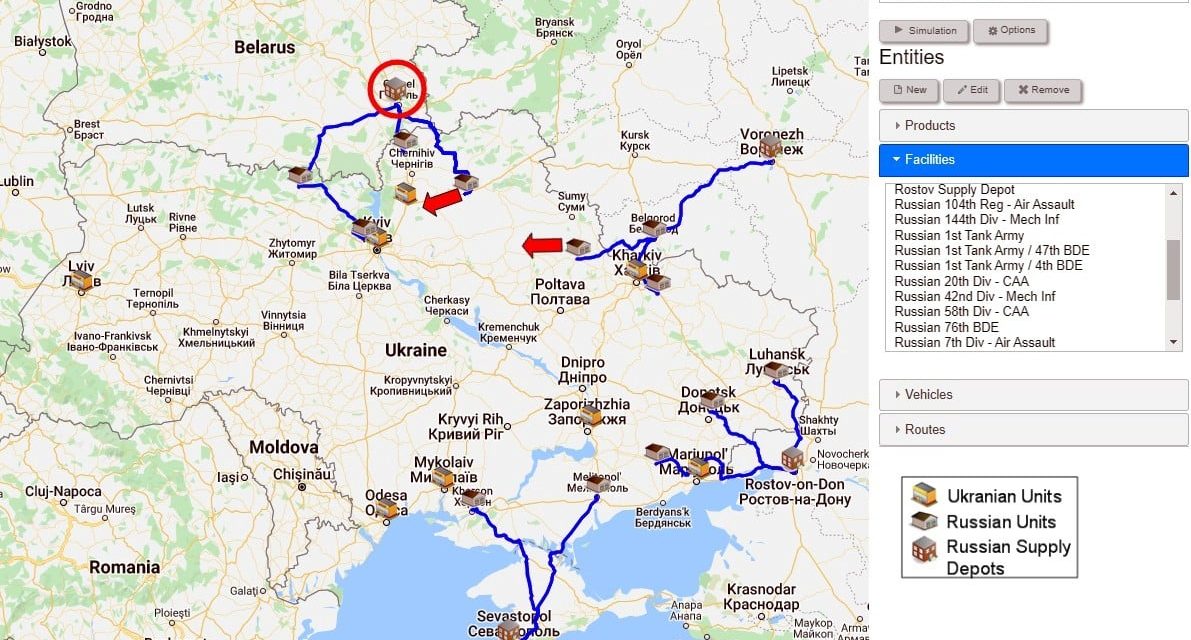 Michael Hugos, Co-Founder of SCM Globe in Chicago, provides fascinating insight into his company’s efforts to build and simulate supply chain models to understand the Russian logistics supporting their invasion of Ukraine. The author currently works with US Air Force instructors to integrate supply chain simulations into logistics training courses.

There is an old saying that goes like this, “Amateurs talk strategy, and professionals talk logistics.”
A recent status report on the website of the Institute for the Study of War – ISW, (https://www.understandingwar.org/) observed: “The Russians continued to attack piecemeal, committing a few battalion tactical groups at a time rather than concentrating overwhelming force to achieve decisive effects. Russian commanders appear to prefer opening up new lines of advance for regiment-sized operations …”

Battle Strategy and Logistics are Two Sides of the Same Coin

Based on the supply chain models we are creating, we believe the Russians at this time cannot logistically support the big troop concentrations needed for overwhelming force. So they continue attacking in smaller numbers (brigade and regiment size units) at multiple locations to try to spread out and thin out the Ukrainian defense forces.

Current consensus indicates the Russian main effort is to encircle and attack Kyiv. This means the supply depot supporting that main effort is most likely located in the city of Gomel in Belarus (circled in red in the screenshot below). We also see some Russian units supported by the supply depot at Voronezh bypassing Kharkiv and heading toward Kyiv. The screenshot below shows how we are defining and locating specific Russian combat units and supply depots based on information from daily reports on the ISW website. Blue lines on the map show routes used to deliver supplies from the depots to the combat units they support.

The Russian drive on Kyiv is at present heavily dependent on trucks to deliver supplies. The roads those trucks must travel are narrow, and wind through small towns and forests with bridges across rivers and streams. The screenshot below shows our supply chain model for the drive on Kyiv. We made some guesses as to daily demand for food, fuel, and ammunition to support a mechanized infantry brigade – in this case the Russian 76th Brigade (76th BDE). 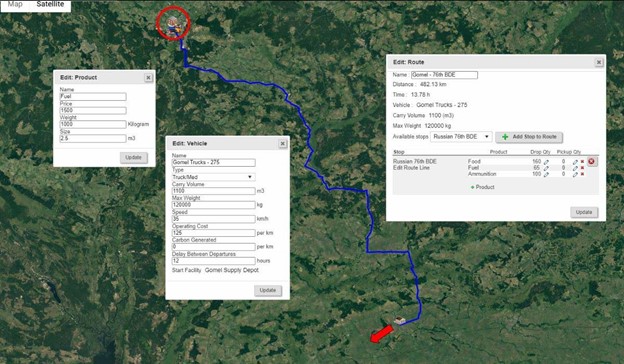 [Any feedback readers can provide to improve this supply chain model is much appreciated. Better data on demand for food, fuel, and ammunition will make the model and simulations even more accurate – info@scmglobe.com]

Assuming those estimates are at least in the ballpark, we zoomed in and turned on the satellite view to look more closely at the supply route supporting the advance of the Russian 76th BDE in its push toward Kyiv. The screenshot below shows our estimates for the cube weight and volume for fuel containers (similar estimates were made for containers carrying food and ammunition). Shown in the other pop-up boxes are estimates for vehicle capacities and speed, and estimated route delivery amounts of products needed to meet daily demands at this brigade.

A few things are immediately clear. The supply route for the 76th BDE goes through territory where ambushes are relatively easy. Our simulations show that approximately 275 trucks must travel this route every day to deliver what the brigade needs to stay operational. That number assumes all trucks will arrive and deliver their cargo to the 76th BDE. The number of trucks would need to increase if some percentage of those trucks were to be destroyed in ambushes.

Russian Army on the Horns of a Logistics Dilemma

The Russians can send a few big convoys every couple of days, or many smaller convoys every day. Big convoys are big targets. But many small convoys are hard to protect. And traveling after dark is always dangerous. So there are only 12 to15 hours each day to make deliveries. As shown in the pop-up box for Route in the screenshot above, this route already takes about 14 hours for trucks to make the trip to the brigade and back. And as the brigade advances the trip time gets longer. This is also true for routes supporting the other units converging on Kyiv (one of which is the 60 km long convoy stuck on the road northwest of Kyiv).

Supplies for the attack on Kyiv will also certainly be airlifted into recently captured Antonov International Airport outside Kyiv. But can the Russians deliver enough to make a difference? Stinger missiles can make quick work of heavily loaded transport aircraft.

Building this supply chain model and looking at satellite views of facilities and routes, leads us to believe that use of the Ukrainian railroad network is the only way the Russian Army can sustain a long campaign. They had planned a quick campaign leading to Ukrainian surrender in a day or two. Then their troops were to live off the land by requisitioning local supplies of food and fuel. But that did not happen. (This is investigated further in an article on the Bloomberg website, “Railways Helped Drive Russia Off Track and Into Ukraine’s Cities“, https://www.bloomberg.com/news/articles/2022-03-04/how-ukraine-s-rail-network-threw-russia-s-military-off-track?srnd=premium&sref=qwIoIxG4).

After their experience with the 60 kilometer long convoy of trucks and tanks stranded on the narrow road northwest of Kyiv, the Russians now know they need to use railroads for their supply chains. The Ukrainians are concentrating their forces to defend the bigger cities which are also key transportation hubs that control movement on the railways. Even if they retreat from those cities, they will most likely destroy the railroad junctions and cargo handling facilities.

The diagram below shows the rail network in Ukraine. Whoever controls the main railroad junctions can also control large sections of the network.

Lviv will be the main entry point of supplies for the Ukrainian Army. From Lviv, supplies will be distributed to combat units by rail, truck, airplane, drone and horse. The Russians probably cannot stop this because they do not have the logistics capacity for moving and sustaining enough troops to seal off Lviv in addition to attacking Kyiv. The Gomel supply depot now supporting the attack on Kyiv, probably cannot also support a separate operation against Lviv. The army of Belarus most likely will not try to attack Lviv, even though it theoretically could, because its soldiers are even less motivated and less well trained than the Russians, and its logistics capabilities are also less capable than the Russians.

Probable Ukrainian Defense Strategy is Based on Logistics

We believe Ukrainian Army strategy will be to concentrate on holding the big cities and force Russians units to get involved in costly urban combat. If the cities can hold out, Russian troops will have to dig in and get bogged down while they besiege those cities. Large Russian troop concentrations surrounding cities scattered across Ukraine will generate a continuous demand for supplies on a scale measured in thousands of tons per day.

Supporting these troops will require extended and vulnerable supply chains running through hostile territory. Much of the Ukrainian highway network is composed of narrow roads winding through forests and small towns, with bridges crossing rivers and streams along the way. Hit- and-run raids using mines, missiles, and machine guns will inflict significant damage on vehicles and soldiers using those roads. Ukrainian guerilla units can also deny Russians use of the railways by blowing up tracks and railyards, and attacking trains. Javelin missiles can destroy trains as well as tanks. The Russians cannot guard every kilometer of the roads and rails they need for their supply chains (as the Germans found out 80 years ago).

This Ukrainian strategy will cause significant casualties. And there will be massive destruction of cities and transportation infrastructure. But it is probably the only way for the Ukrainian Army to hold off and wear down the much larger Russian Army.

It will be a strategy that plays out while the rest of the world watches, day after day. And that will also be part of what brings this war to an end.

By Michael Hugos, Co-founder at SCM Globe, https://www.scmglobe.com/ LinkedIn Profile – https://www.linkedin.com/in/michaelhugos/ The model is now available in the SCM Globe online library and we will continue to update it as the situation changes. We are looking to partner with people interested in working with us to build out the models and analyse simulation results.

BBBEE Compliance vs Government Procurement Practices – a Contradiction in terms?

Purchasing cards can work in government