Using SMS’s to control the procurement process and boost governance

In organisations in which executives with approval authority are often out of the office, e-Procurement functionality is extended to enable the executive to approve a purchase request via SMS. Says Arthur Benting, IT manager at MWEB CommerceZone, a hosted e-Procurement solutions provider, “It won’t matter if the executive is out of the country or without access to email or the Internet: he or she is likely to have a cell phone and the ability to check for messages throughout the day.”

“Since the Internet arrived on the scene as a supply management tool in the mid- 1990s, companies have tried to gain the benefits e-Procurement can deliver: process streamlining, improved contract compliance, increased spend under management and cost reductions. But there are issues emerging around the Internet as the only medium of communication in e-Procurement.
“One of these relates to time delays in obtaining procurement approvals from on-the-move executives who may not have immediate access to the Internet. Delays in approvals results in a wide range of problems, from lost opportunities to capitalise on ‘specials’ and other cost benefits, to increased temptation towards off-contract (maverick) spending,” he adds. “The key, therefore, is to eliminate these delays as far as possible.”

Remote approval
One way in which this is being achieved is to extend e-Procurement into the mobile arena through the integration of SMS technology into the e-Procurement approval process.
In organisations in which executives with approval authority are often out of the office, the system is being extended to enable the executive to approve a purchase request via SMS. It won’t matter if the executive is out of the country or without access to email or the Internet: he or she is likely to have a cell phone and the ability to check for messages throughout the day.

“When SMS is incorporated into the e-Procurement approval process, all that happens is that in addition to the usual online approval process, the executive is sent a SMS that outlines the contents of the requisition. The executive then simply responds with a preset authorisation code,” Benting explains.
This has significant implications for the organisations corporate governance compliance – and non-compliance.
Benting notes that corporate governance initiatives are having an impact on procurement, particularly in the area of process compliance and performance, as well as in the preferential procurement arena.
Results of a survey published by the global market research company, Aberdeen Group, in December 2004 revealed that between 2001 and 2004, e-Procurement tools resulted in a 64% reduction in maverick spending and a 7,3% reduction in prices for spend brought back onto contract.

The survey further found that each new dollar brought under management could yield 5% to 20% cost reductions.
More recently, (April 2006), however, research released by Aberdeen showed that while contract compliance was a priority among contract management executives, just two-thirds of procurement transactions were compliant. The resulting maverick spending led to significant savings leakage in lost discounts or rebates.
“Thanks to advances in technology and greater integration of the e-Procurement systems with other enterprise IT systems, enterprises are achieving more value from e-Procurement.”
“Because this value derives largely from compliance, and compliance demands adherence to pre-established protocols, governance and pre-approved contracts, the utilisation of SMS technology makes compliance more readily attainable,” Benting concludes.

R3 600 – the cost of a purchase order in government 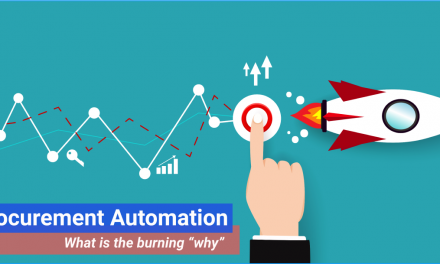 Procurement automation: what is the burning “why?”